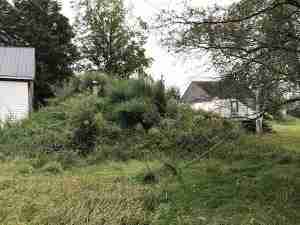 If you visit One Drop Farm in Cornville, Maine, look for the hill near the pond. They may seem like natural features of the landscape, but neither were there just a short while ago.

And the pond? Read on to find out…

Everyone who grows produce for market is likely familiar with Andrew Mefferd. Or at least with his work. In addition to running One Drop Farm, Mefferd is the current editor of Growing for Market, a publication that’s been providing news and ideas for local growers since Lynn Byczynski founded it in 1992. He also wrote the book on growing organic vegetables in greenhouses and hoophouses (you can buy it here).

Mefferd didn’t initially set out to be a farmer. He wanted to be a journalist. Unfortunately for that career plan, he graduated from journalism school in 2001, right when “the internet was busy destroying print journalism,” he says.

Mefferd started getting more interested in farming, specifically in organic vegetable farming. He spent several years on what he calls the “apprenticeship circuit,” moving around working on different farms. He covered six states before settling down in Central Maine.

For all of its other advantages, Maine is a very cold state, which means it has a very short growing season. So, Mefferd took job in the research department of Johnny’s Seeds, where he did variety trials and greenhouse research. The results of this research formed the foundation of his book, The Greenhouse and Hoophouse Grower’s Handbook.

Mefferd and his wife, Ann, were finding success with One Drop Farm. But they had one big problem — no cold storage. “We would harvest the vegetables and bring them into the basement of our house,” he says.
That was a reasonable plan for a while. The Mefferds live in a farmhouse built in 1826. It has a big root cellar. But, as Andrew points out, “root cellars really aren’t cold enough to store produce for any length of time. It’s better than leaving them out in the hot sun, but only marginally.”

Without the ability to store their produce, the Mefferds would harvest the night before market and bring it into the house. If it didn’t sell, it would go bad. “Plus, it was a real drag (literally) to take things in and out of the house,” Andrew says. “It was good exercise, but a lot of extra work.”

They realized that the lack of cold storage was the biggest thing holding them back. So, they decided to get a CoolBot and build a cooler.

Andrew knew about the CoolBot from his apprenticeship circuit days. “A lot of people we worked for had CoolBots. I’d also seen the ads in Growing for Market before I started working there, so I knew where to get one when the time came.”

However, he didn’t want just an ordinary cooler. He wanted a structure that would be naturally insulated not only to keep crops cool in the summer, but also to protect them from getting too cold in the winter. Cornville can see temperatures as low as -°30F, which not even winter squash can stand up to. “It’s just as valuable here to have protection from being too cold as being too hot,” Mefferd says. “I was looking for a heavily insulated structure that needed minimal cooling and heating, but could do both.”

This is a problem local farmers have been solving creatively for a long time. Northern Maine is a huge potato-growing region, and it’s common for farmers to their build potato houses into the side of a hill so the earth can act as natural insulation. 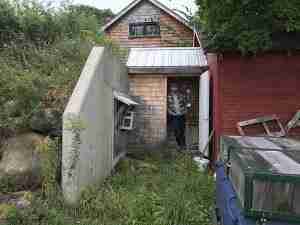 He called the contractor, who said, “I can bill you by the load to bring the dirt in, or I can dig a big hole and put the soil on the cooler.”

There was an area on the Mefferds’ property that was always wet, even during the hottest, driest days of summer, and they were pretty sure there was an underground spring.

“Well,” they thought, “we’ve always wanted a pond. So let’s dig a hole.”
The contractor poured the box, leaving a hole for the air conditioner. Then, Mefferd used an excavator to dig a hole and cover the box with about 4 feet of earth. “It looks like a bomb shelter,” he says.

“You can’t see the shape of the concrete box anymore. It’s just a big bump.” 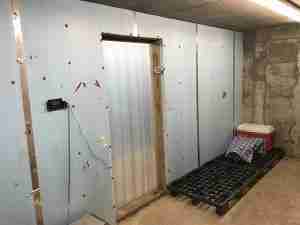 The cooler bump sits next to a building that the Mefferds use as a packing shed, so they can wash and pack the produce and then take it straight into the cooler. It also has a wall running down the center to separate the “cold” side from the “cool” side, with a chart on the door to tell people what goes where.

There are also two large pipes coming out of the top of the cooler, each of which contains a fan.

These fans serves two purposes. First, they circulate the air, which helps with long-term storage. “With cold storage, you need air circulation if you want to store crops for a long time. Otherwise, produce like winter squash will rot.” Second, they help keep the electricity bill down. “We have cool nights year-round. The fans bring in the night air so we don’t have to pay to run the air conditioner all of the time.”

Now, the Mefferds have affordable temperature-controlled storage all year long. They don’t have to strain their backs hauling produce in and out of their basement. And they have a pond to skate on when the those -°30F days arrive.

Their only regret? “If the turnkey CoolBot Walk-In Cooler had been available at the time, I would definitely have purchased it,” Andrew says. “It would have been a lot less work.” Cheers to that!

The next time you find yourself in Central Maine, be sure to check out One Drop Farm. If you’re there between May and mid-June, find their plants at the Skowhegan Farmers’ Market. You can also order seedlings online. And don’t forget to follow One Drop Farm and Growing For Market on Facebook.