Hunting season is here and Nick Duncombe is ready.  Two years ago, he built a CoolBot powered game cooler which he calls “a complete game changer.”  He’s happy he’s saving money, his wife is happy that the game meat tastes better, it’s a win-win! Now with the release of the CoolBot Pro he’s even happier!  Instead of walking out to his game cooler, Duncombe says, “I can use my phone!”  Check out his set up in the video below.

It’s mid-September, which means elk hunting season is in full force. Everything’s going your way, and you bag an elk a few days in. You can’t wait for that first bite of elk tenderloin, and you’re excited to fill your freezer with meat for the winter. So, you throw the elk on the back of your rig and call your local meat locker, only to be told that they’re full. The next closest one is also full, and you end up having to drive 65 miles to a different town to find a processor with space available. Then, of course, they’ve jacked up the price because it’s peak season…

This scenario isn’t hypothetical. It happened to Nick Duncombe, aka Wyoming Hunter, and a friend a few years back. It was too warm to hang the animal outside, and they had trouble finding a processor that could take it. In these types of situations, it’s not uncommon for a hunter to have to shell out $500 or more, which is certainly not chump change.

Duncombe is an avid hunter. He mostly bowhunts antelope, elk, deer and other game. Last year, he had tags for four animals. He was also unemployed due to a decline in Wyoming’s oil industry, where he’d worked for 10 years.

Paying $1000 or more for cold storage and processing for his game simply wasn’t an option. “I had to come up with something,” he says. “I have a friend who has a meat locker, but it doesn’t work as well as it needs to in warmer temperatures. I’d wanted to build a homemade walk-in cooler for a couple of years, but I didn’t know how. Then, my friend told me he’d heard about a system that could override an air conditioner unit. I did some research and found the CoolBot.”

Duncombe built his homemade walk-in cooler last year inside of an existing shed on his property. The cooler is 4’x6’ and uses a 10,500 BTU A/C that he found in the classifieds for $100. “I didn’t want to spend a lot on lumber and materials,” he explains. “My shed is insulated, so I already had two insulated walls for the cooler. A friend had some lumber he didn’t need, so I got some 2x4s and plywood out of that.”

After building the cooler, he insulated it with some rolls insulation that had been sitting in the attic since he bought the house and put styrofoam reflective board on the walls. He raised the floor to accommodate a layer of styrofoam and also dropped the ceiling to put in some insulation.

Then, he sealed it all up with expanding foam. Now, even in 80+°F weather, the cooler stays nice and cold (Duncombe typically runs it at 38°F). All told, he spent about $250 plus the cost of the CoolBot. That’s less than he would typically pay to take an elk to a meat locker. “I was pretty happy with the savings there,” he says. “Plus, the investment in the cooler will save us money on our grocery bill in the long run.” 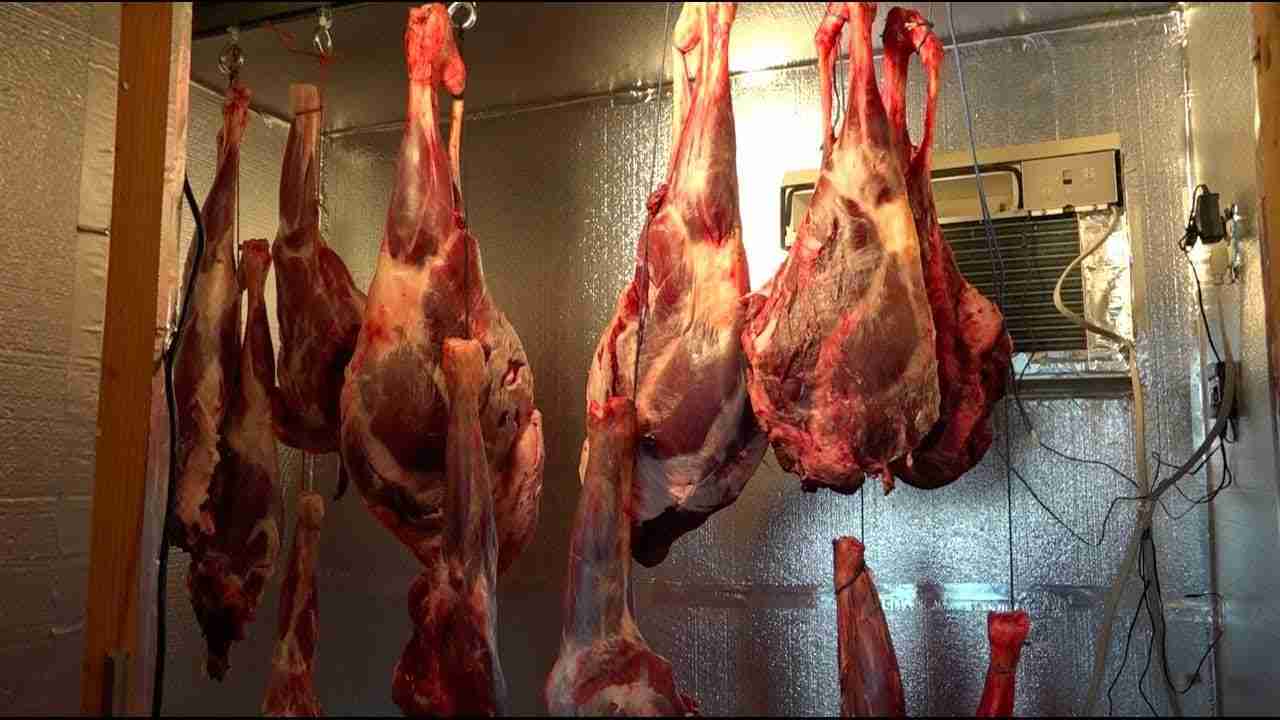 Duncombe’s walk-in cooler offers benefits beyond saving money and eliminating the hassle of dealing with processors. First, it provides flexibility. “If I’m still hunting, I can bring the animal home, hang it up, go back to hunting, and it’ll be fine,” he says.

More importantly, Duncombe and his wife can now process all of the game themselves. “My wife grew up on a ranch and had never eaten game meat before we got married. It was a little tough for her to make the transition, but now she doesn’t notice a difference. It’s important to take good care of the meat. A lot of the gamey taste that people don’t like can be eliminated with proper processing and preparation.” That care starts out in the field.

Rather than the traditional method of gutting and hanging (which is what they do at the processor), Duncombe uses the “gutless method” of field dressing wild game. “I just skin it right there on the ground, get all the meat off, put it in game bags, and cool it down right away,” he says. This results in better-tasting meat, which both Duncombe and his wife appreciate.

“With the traditional method, even with the temperatures being right, I’m just not comfortable with the way the meat tastes. If you take meat out of the freezer and you look at it and think ‘I really don’t want to eat this,’ it’s not very pleasurable. It’s great to just go get a package of meat and not have to wonder how it’s going to taste. You know it’ll taste fine.”

Saving money and eating better — sounds like a winning combination to me!

If you’d like more details on how Duncombe built the homemade walk-in cooler and how it’s working so far, check out this page on the many uses for hunting and meat, along with these videos: How to Build a Walk-In Game Cooler and Update on Walk-In Cooler. While you’re there, subscribe to his Wyoming Hunter YouTube channel for videos on all things hunting.